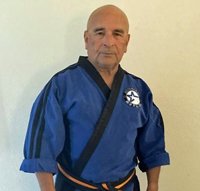 Sensei Joe began his Martial arts journey in 1972 while attending Northern Arizona University where he trained in the Chung Do Kwon school of Tae Kwon-Do.  After graduation, he began working in his career field and he found his Hapkido teacher, James Pyong, 5th Dan, and trained with him until his return to Korea. He then met and trained with his Tae Kwon-Do teacher and Master, Jong Kil Kang, 10th Dan, for more than a decade.

He was fortunate to be taught by teachers who were “close to the root” of purity and knowledge of the Korean Martial arts.  During this journey, he also competed, met, and trained with various Martial Artists in Tang Soo-Do, Okinawan Shito-Ryu, American Kenpo, Brazilian Jiu-Jitsu, and as a Boxer.

As an instructor, under his guidance, he has taught over 2000 students, promoted 22 Black Belts.  He looks forward to serve as your child’s martial guide and teacher.