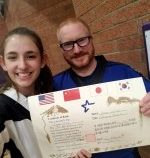 Sensei Jason has trained with ACTIVSTARS for over 4 years. He received his 1st degree black belt in Toushikan karate in 2017. Martial arts has been a passion for Jason since he was very young.

Starting his journey with Shotokan karate, he also enjoyed studying Chinese Kempo with his instructors.  Sensei Jason has utilized his belief of martial arts as a way of life to become an instructor for students as young as 4 years old all the way to the adult learner. He focuses on discipline, respect for yourself and others, along with physical fitness to build a strong self confidence in all his students. Sensei Jason continues to train every day with the addition of his 3 children joining ACTIVSTARS on their own paths to obtaining black belts.

Jason’s kids are also students in the program.  His ultimate goal as an instructor is to reach out to the next generation to build lifelong skills.