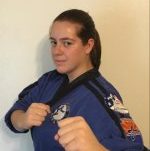 Sensei Allison has been training in martial arts since 2003 and began training under Sifu Aaron Williams.  Allison worked through the belt ranks and achieved a second-degree black belt within ACTIVSTARS and A-Longs Kung Fu Academy.  Her main style is Northern Shaolin Long Fist Kung Fu.

She has trained with Master Shi Yanqing, who is a 34th Generation Shaolin Warrior Monk in Chandler, Arizona.  In the summer of 2015, Allison traveled to China to train with the monks at the shaolin temple.

Allison has been teaching at ACTIVSTARS since 2013. she enjoys teaching various styles of defense and martial arts. Allison enjoys teaching a healthy and active class where students can learn to defend themselves from strangers and bullies in everyday life, while picking up the discipline that comes with marital arts.